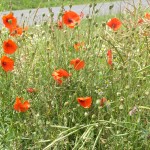 They shall grow not old, as we that are left grow old:
Age shall not weary them, nor the years condemn.
At the going down of the sun and in the morning
We will remember them.

At this time of each year we pause, and reflect, on a past that has forged our Nation and has impacted us all in no small way the lives we led growing up, the lives we live today, and the life we have left to us.  Lest We Forget.

We were the war babies of WW II. Born between 1939 – 1945. We all age 69 – 75. We were born into an era when our parents, in addition to trying to live and love, have children and lead what anyone always hoped to be a normal life for the times in which they lived, also had to consider what ‘normal’ really was with a world at war.  Lest We Forget.

In 1939 Canada went to war. Young men rallied to the Flag and lives were changed forever. It is at this time of each rolling year we pause and reflect upon all those men and women who rallied in their own way and circumstance to the life duty had thrust upon them, whether it was to go into the military, tend to the home fires, or assist and give aid and comfort to their neighbour in time of national peril.  Lest we forget.

What was it like for a young man of that era? What was a normal life? Robert (Bob) McDonald, of Victoria, B.C., offers us the story his father, Flight Lieutenant Douglas McDonald, RCAF, told his family. Here is:

The ads were up everywhere. The Air Force was advertising for machinists. I had spent five years at Vancouver Tech learning to be a machinist and then another five years with Consolidated Mining and Smelting Company in Trail, B.C. as an apprentice.

Britain had declared war on Germany September 3, 1939. The ads I saw were up about a week after that had happened. I went from Trail to Vancouver on a weekend and put my name down to enlist in the Air Force. I then returned to Trail and waited to hear if I was accepted or not. It was about three months before a telegram was sent to C.M. & S. telling me that I was to report to Vancouver for enlistment.

When I was sent to basic training I was told that I would learn to be an armament artificer. The training was done in Trenton, Ontario. Officers from the British Air Force were brought over to do this (the Canadian Air Force was in its infancy and had no training officers as yet). Course followed course. The Air Force was very anxious to get men trained to begin training other Air Force trainees. Men were being sent to Canada from Australia, New Zealand, Poland, and many pother countries. Our last one was a “Senior Armament I Instructors” course.

Once our training was completed three of us were sent to Mosbank, Saskatchewan. We had to go by train to Moose Jaw and then take a bus to Mosbank. When we arrived in Mosbank we were made instructors. We trained aircrew trainees to drop bombs and fire machine guns from the turrets of the aircraft. Each class had twenty-five men or so, and they trained for two months. When a class graduated on Friday, another class came in on Saturday. As instructors we received promotions, but we had no breaks, not even weekends off.

After two years of instructing, I was beginning to get a little “wonky.” By this time I was a Warrant Officer. I guess this behaviour was not considered acceptable for an instructor and I was relieved of my duties and given a commission.

My new uniforms arrived and I was shipped off to Dafoe. “What am I doing here?” I thought. No one had told me what my job was. Down I went to the armament section. I told the non-com in charge I wasn’t there to interfere and he was to go on with his job. He looked at me with a, “Hmm, what is this guy up to” look, and went on with his business. I spent my time there and listened and watched.

I was transferred to other stations and did the same thing, just listened and watched. Then one day one of the fellows told me they had a complete washout! This meant that the majority of guns used in the exercise that day had jammed. I had heard about a small percentage of the guns jamming all through my time in the Air Force but being at the school end of the training, I didn’t look into the problem. I took all the guns and checked them out. Then I had all he trainees come in and try the guns and they all worked. What as going on? I called all the trainees in again and lined them up. “Tell me which one of you had your guns jammed,” I asked. I noted one thing about all these men. They were of smaller stature than the fellows who had no problem with the guns.

I went back to the shop with this information and proceeded to study the guns again. I looked at the various parts of the gun and how it went together and I worked at making them jam. Called the trainees in the next day. All the guns were mounted on stands ready for inspection. “Cock these guns,” I told them. All the guns jammed! I had discovered a defect in the cocking mechanism. It was a fault I could fix. I fixed the problem and had all the trainees try out the repaired guns and here was no more jamming.

All the other training stations needed to know about this so I sent a repaired gun off to head office with a letter detailing what I had done. Three or four months later I received a morning phone call asking if I were dressed. “Yes,” I said. “I have my uniform on.” “Good,” said the voice. “Someone will be right over.” Two officers appeared at my door and escorted me to the Commanding Officer’s office. The commanding officer stood in front of me and read a letter of commendation from the Chief of the Air Staff. I had cured all their guns.

The two officers then escorted me out of the office. They turned to me and said, Hey, Mac, what the hell was that all about?” I explained that hundreds of man-hours had been lost because of the defect in the guns and I had fixed this.

Interesting – if they hadn’t given me a commission I wouldn’t have looked into the problem and we would have continued losing flying time. Every time a gun jammed it meant a trip had to be redone. A stoppage that involved a pilot, an aircraft and all the ground crew required for the exercise. It had been going on since the beginning of the war, two odd years earlier. At least from this time on the exercises were completed more quickly.

Unfortunately, I can’t find my letter of commendation. Must have thrown it out one day when I was reminiscing. Why – I don’t know? RCAF Headquarters in Ottawa would probably be able to send out a duplicate. My RCAF number was C25575 and my title was Flight Lieutenant Douglas McDonald.

There was another part to this story. When we reached Moose Jaw on our way in to Mosbank the first time we decided to see what there was to see in town. Walking down the street we met a man who stopped and invited us home for dinner. “Thanks very much,” we said, “but those British airmen across the street are farther from home and would enjoy a good meal.” We carried on up the hill to a hall where a dance was in progress. We went in and while standing back and watching the action I noticed a young woman nearby talking with a fellow. “No,” she said, “I’m not going to dance with you. I’m waiting for Doug.” The other fellow went off and I went up to her and said, “Let’s dance; I’m Doug!” She couldn’t very well refuse could she? The young woman was Dorothy.”

I married Dorothy about two years after I had been sent to Saskatchewan. By the time I had my commission and was being move around, Robert had arrived. Each time we moved I’d have to find a place for my wife and baby. I remember once asking this woman if she would take us in. She said, “I can’t have a baby staying here. He’ll make to much and disturb my other boarders.” I told her our baby was quiet and didn’t make a fuss. We did stay at her home and the next day she agreed Robert was a very good baby!

At war’s end Flt. Lt. Doug McDonald enrolled at the University of British Columbia and graduated as a Professional Engineer and worked in that profession until age 66. He passed away at the age of 86. Married to Dorothy they had three children, all three years apart: Robert (Bob), Hugh, and Janeta. Doug and family lived in North Vancouver, B.C.

A Salute to all our veterans. We owe them a debt we can never hope to repay in full kind, only in some small measure, and that payment we must give in full measure is to remember.  Lest we forget.