Be the best that you can be. A simple phrase but one of profound wisdom. Life is not a playing field of half-measures, a game of no-give and all-take. Life is work. It  is also fun. Life is striving to attain a set goal. And once achieved striving to attain another. Only then does the fun part of life take on real meaning, all stemming from a sense of real accomplishment. Life is balance – give and take, the take, and it’s measure of bounty, being a natural product born of the give.

And on that often rugged road to personal goal attainment only one maxim applies: be the best that you can be: the words of Canadian legend Bobby Ackles, water boy for the B.C. Lions football club of the Canadian Football League back at the team’s birth in the very early fifties. Up through the ranks to become president of  those same B.C. Lions with  time-outs along the way to go south to the United States and establish another successful career  directing player personnel for the Dallas Cowboys, Arizona Cardinals, Philadelphia Eagles and Miami Dolphins of the NFL. 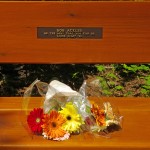 He even took the snap of  the senior management ball for the Las Vegas Outlaws of the fledgling XFL before trying a well earned, albeit short-lived, retirement play call, only to be enticed back home to Canada by businessman, and now senator, David Braley, to resume calling once more the senior management signals as President and CEO of the B.C. Lions.  His Lions and the community responded with heartfelt enthusiasm. Bobby was back. And so was the team. In every way.

Bobby Ackles is a legend, not only revered  throughout the Canadian Football League but in the community at large where he did so much to bring a touch of warmth and class to everyone with whom he came in contact. Prince or pauper, it made no never mind to Bobby. He always had time to stop and offer a good word. Prior to home games he’d be seen outside B.C. Place Stadium in Vancouver, glad- handing the fans. The executive suite or the pavement outside, it was all the playing field of life for Bobby Ackles.

A diminutive man in size only, closer to five feet than he was to six, Bobby Ackles was, quite simply, the world’s shortest giant. He touched everyone with whom he came in contact. “I believe you motivate  and inspire any team or group by acting with integrity, displaying loyalty, and, again, working hard. You lead by example. Transparent, humble, flexible, confident, mature – these are the qualities of leadership,” he said.

And then that fateful day. Sunday, July 6, 2008. Bobby took his yacht Waterbuoy to the Union Steamship Marina on Bowen Island, something he did often, well liked and respected by all in the island community.  He was off up the street for coffee and a newspaper when suddenly and without warning the Boss in the ultimate Head Office called down, “kid, grab your playbook and get up here.” Bobby Ackles collapsed and died of a massive heart attack.

The football world was stunned. The community was shocked and bereft of solace. Tears flowed freely. The community had lost a friend and mentor.  Or had they really…

Across the street where Bobby had fallen on Bowen Island stands a pristine forested park. At the entrance trail to the park is a bench. The bench was placed there by the staff of the B.C. Lions. His staff. As one walks by the park entrance there are often kids sitting on the bench. There is a plaque on the bench dedicated to the memory of Bob Ackles. There’s an inscription.  As you watch the kids sitting there you can hear the sound of wind through the trees, or maybe it’s the voice of Bobby telling them:  be the best that you can be.

Bob Ackles quote:  from his book The Water Boy written with Ian Mulgrew